Presenting announcements isn’t just about reading words from a sheet of paper. There is a lot more that goes into making a video announcement sound professional. As a teacher in charge of the school morning announcements, you’ve probably faced the challenge of getting your anchor to sound like professionals, to be rhetoric.

You might have had some success so far, but, you’ve probably not really achieved perfection. Well, don’t worry. We’ve composed a list of tips to help out. All these tips are exactly what professional news reporters and anchors rely on.

So, do continue reading and make sure to take down a few notes.

The most important thing to master anything in life, is practice. So, make sure your student reporters and anchors are putting in enough practice! You can start by getting them to read news stories in front of the camera at least a few times a week.

Make sure you record these readings, because you can use them for rehearsal and find improvements for the language, pronunciation and reading speed.

Don’t just rely on your own opinion. Make it a point to get the perspectives of other people, especially your audience. So, show the recording to teachers and other students. Ask them for feedback and make the necessary changes, if applicable.

Free Checklist: Things you need to remember in order to sound like a real news anchor.

Some students will probably read too fast. There is nothing inherently wrong with this, especially if they’re comfortable with it. However, when it comes to presenting news or announcements, speed matters a lot. The key is to make sure the student anchor and reporter doesn’t speak too fast or too slow.
If the anchor speaks too slow, audiences will lose interest. On the other, hand if the anchor speak too fast, it becomes hard for the audience to make sense of what is being spoken.

According to research, a professional news anchor reads at a speed of 150 to 175 words per minute. Though your students may not need to actually read at that level, they can be trained to get close.

Enunciation is another thing that matters when reading. Student anchors who read too fast can be trained to enunciate words better. Not only will this help them slow down, but also achieve clarity with every word they speak.

Again, practice comes in handy here as well. So, make sure your students keep going at it till they become proficient at what they’re doing.

For more help, you can have your students read from a tablet or laptop. There are applications that can adjust scrolling speed.

Now, announcing is not the same as reading. Unfortunately, most students will have a problem in this area. Instead of sounding like they’re presenting information, they’re likely to sound like they’re reading, which is what they’re actually doing.

Announcements need to be conversational. Reading sounds too robotic and that can bore people. Ask your students to practice their reading as if they were having a conversation. The best way to do this is by getting your anchors to read out the news, to a friend, in a conversational manner.

America is a diverse country and a lot of your students come from diverse backgrounds. It’s only natural that there are going to be variations in accent. Now, it’s important to remember that accent does not matter in most cases to transfer information. Show the diversity of your school openly and encourage students to speak in public or in front of your camera.

However, most audiences are used to what is known as a “General American” accent. Now, you might have to put in a little extra effort to help your students speak with such an accent, especially if your anchors aren’t used to it.

Start by exposing them to actual news reports. Professional anchors and reporters use a general American accent. Ask your anchors to speak like them and to keep practicing until they come close enough.

One way to get started is by listening to a single sentence, pausing and repeating the same sentence. Repeating entire paragraphs will be much harder.

However, the key thing to remember here is that you need to remind your anchors that there is nothing wrong with their own accents. Tell them that they need to do it purely for the sake of the audience. Tell them that they don’t have to get the exact General American accent. All they have to do is come as close as possible.

Now, one’s tone is also very important when presenting news or announcements. In fact, the tone has a lot to do with communication in general. There is a certain way you say certain things. For instance, you do not use a condescending tone to compliment someone; that just comes off as you being sarcastic and insulting.

So, make sure your anchors understand the importance of tone. This is very important when announcing sensitive matters. Let’s say you want them to report about an old teacher’s retirement. Now, you wouldn’t want them saying that in an energetic, upbeat tone because it could send out the message that everybody’s happy to see this teacher make his/her exit.

At the same time, you don’t want them sounding completely unemotional as it can come off as being indifferent. A perfect tone would be one that sounds compassionate and mildly enthusiastic. This would indicate that the school is happy for him/her and that it only wishes him/her the best.

The production team also needs to make sure that the content is organized properly. Switching from an upbeat story to a serious one can confuse the anchors. It is very hard, even for professional anchors/reporters, to transition from a positive story to a negative one and vice versa.

One way to combat such transitions is by inserting a neutral piece in between. This will help anchors make the necessary adjustments before they move on to the next topic. The production team has a key role to play here.

So, there you have it – our list of tips to help student anchors sound as good as professionals. Just put them into practice and you’ll see things change for the better gradually.

Free Checklist: Things you need to remember in order to sound like a real news anchor.

Learn how to read and speak like a news anchor 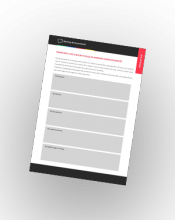 No thanks, next time.