When it comes to morning video announcements, there are several factors that need to be taken into consideration. After all, we are aiming to produce something that’s of high quality. However, there are plenty of cases where morning announcement teams forget to prioritize one particular aspect of their production efforts – audio.

Audio plays a very important role in making your video appear professional. No matter how awesomely shot a video might be, if it’s got a bad sound, the final results are still going to be questionable. This is why it’s more than necessary to ensure that the audio and sound come out as clean and neat as possible in your morning announcements.

Here are a few tips to help you out.

This is one of the most basic things to do. If there’s external noise it will interfere with your audio. So, make sure the studio is as quiet as possible. If possible, try to install some makeshift padding using a pillow and cloth. If there are crew members in there who don’t need to be, ask them to leave. The more people there, the higher the noise levels are likely to be.

Get Your Hosts to Speak Clearly

Now, it’s possible that your hosts for the morning announcements aren’t speaking loud and clear enough. This is bound to happen when you’re working with young people, especially school kids. But, the problem can be overcome with simple encouragement.

Just teach the hosts to speak more clearly and a bit more loudly than they normally do. This simple fix alone will improve the audio quality of your recordings.

Now, this might be a hard task. After all, you’re working on a school-allocated budget. But, if it’s possible, do try to purchase the right equipment. Of course, that doesn’t mean you have to go overboard. Focus on quality and usefulness. Do not fall for superficial features.

For instance, don’t spend on features that you’re never going to use. However, if there’s a piece of equipment that’s got everything you need, then a higher price can be justified. You might be hesitant, but, money spent on things you actually need isn’t all bad. If you can’t source the money for good equipment, try to make the most of what you’ve got. For instance, it has been observed that recording at proper levels with a cheap recorder produces better sound than recording at lower levels on a high-end recorder.

In a recorder, it’s preamps that you need to keep an eye on. A recorder that doesn’t offer good preamps is as good as nothing. However, even with preamps, you can still have interference due to external noise. So, record at the highest level possible and reduce the sound during post-production. However, don’t go over the limit as system noises can creep in. If a certain sound is naturally at a low level, keep it that way. After all, it’s natural, right?

Try to avoid the temptation of overprocessing. It’s understood that tools such as reverb, noise reduction, and compression can be helpful. However, there’s a certain limit to how much you can implement them. The standard rule is “less is more”. These tools are primarily there to enhance the audio; not overpower it.
For example, if you implement too much compression, you will be forced to deal with those dynamics on a permanent basis. However, if you stick to the limit, the original dynamics remain put.

The same applies to equalization and reverb.

Now, it’s okay to go a little overboard in the name of creativity. However, if you don’t need to, you don’t have to.
It’s always a safer bet to the original audio/sound.

Can't remember everything? No problem, we've got a checklist for you!

Make sure you run a test prior to the recording process. This includes checking microphones and any other playback device/source such as file servers, Digi cards, or videotapes. After you’ve readied all the equipment, position your talent. In this case, it would most likely be your anchors/hosts. Make sure they are early to the set. You will need the extra time to make sure everything is working fine.

Once your hosts arrive, make sure everything is placed appropriately, such as the microphones and microphone cables. Conduct an audio level check after that. One key aspect to keep your eyes on is how the hosts position their microphones.

If you fail to do this, you will have to deal with poor audio.

Make sure to look for consistency when monitoring levels. The problem with between loud and soft sounds is that, after a point, you lose the ability to judge. This is especially true when there are studio monitors or headphones involved.

The trick is to find the “sweet spot” and stick to it. Of course, you will need to turn that dial to look for noise and other audio-related problems. That’s fine. However, make sure you go back to the original level once you are done. Not doing so will lead to audio inconsistency. Plus, your ears will become sore. The best solution is to find an ideal level and remain there.

Don’t Rely on the Camera Mic

The camera mic may be convenient, but, it should never be your go-to option. They are not great in terms of capturing sound with clarity. In fact, they pick up all sorts of background noise. If you can, do invest in an external mic.

That way, you don’t have to bother about proximity or external noise. Handheld mics are your best bet as they are designed to capture only the sound that is fed into them directly. This will help you deliver clear audio and automatically get rid of the external noise.

What do you need for your Morning Announcement?

Did you think of everything? Our Requirements-Checklist will help you to remember the most important stuff. 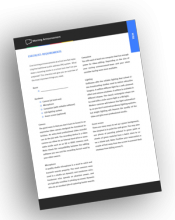