Morning Announcements as a School-Intern Source of Information?

A school day can never really begin without a morning announcement. The day just feels empty otherwise and more importantly, students need to be updated on what’s going on in their school. Morning announcements are the best way to do it.

A school day can never really begin without a morning announcement. The day just feels empty otherwise and more importantly, students need to be updated on what’s going on in their school. Morning announcements are the best way to do it.

After all, plenty of things happen in a school on a daily basis and how else can you effectively communicate about what’s going on? Morning announcements can be effectively utilized to bring the school news to the students.

To help you out, we’ve listed a few ideas that you could try.

The Pledge of Allegiance

Now, a typical school morning announcement begins with The Pledge of Allegiance. This is a standard feature. However, it doesn’t have to be a simple recital. There are creative ways you can go about this.

For example, you could add a background tune that sounds patriotic. The national anthem would be a good choice. In fact, if it’s possible, you can even get the school’s best singer to sing the anthem and then, recite the pledge.

To add a little more “impact”, you can probably overlay the announcement with patriotic images or videos that will motivate students.

Is the school anniversary approaching? That are some school news, so what better way than to use your school morning announcement to highlight this fact. Plus, you’re going to be doing this with video and video gives you much more room to be creative with your ideas. There are plenty of ways to present these kinds of announcements.

Now, you could simply read out facts concerning the history of your school. This would be good enough. But, you don’t have to limit yourself to just having them read out. Go the extra mile and look for other ways in which the information can be best presented.

One way to talk about your school’s history would be by narrating a story that discusses its origins and how it grew into what it is today. Of course, you would need someone with the skills to narrate. Naturally, an audition would be necessary to identify this person.

Another idea would be to script a skit that explores the school’s origins and act it out for the morning announcement. Since it’s going to be a video broadcast, you will have the luxury of recording the skit in advance.

This will allow you to make sure that everything goes well and even if there are minor issues, a little editing can always help sort things out.

The cafeteria menu changes on a daily basis and a good way to let students know this is by presenting it as part of the morning announcement. This can be quite helpful for students who are allergic to certain foods, as they can be forewarned about ingredients that may not agree with them.

As for creative ways to present this, you can probably overlay the screen with images of the dishes being served. You can also add a description of the dishes, similar to what restaurants do on their menu cards.

If possible, you can even take things further and actually show how the dishes were prepared by the school cafeteria’s cooks. The format can be similar to a cookery show.

You can also speak of the nutritional value that each dish offers.

Holidays are something that you students obviously love. So, why not give them an update on the National Holidays that you’ll be having in the current school year? In fact, it might even come in handy for the teachers, who can use the information to organize their lesson plans in sync with any upcoming national holiday.

You can also speak more about particular holidays. For instance, if it’s July the 4th, you can probably speak about America’s independence and the history behind it. A short skit can also be included; one that covers the important aspects surrounding the fight for independence.

The same idea can be used for almost every type of national holiday.

Need a handout? - No Problem! We've got one for you!

There is always something special happening in a school. Now, schools prefer to highlight such information using printed notices. However, a school morning announcement would be much more effective. This’ll make sure that your students actually pay attention to the announcements.

For instance, is there a big game coming up? Well, come up with an idea to present the information in an interesting way. Maybe, you could follow an advertisement-like format for such announcements. After all, advertisements are basically glorified announcements.

A game is something that is associated with high energy. So, come up with a script for a “high energy” advertisement. Maybe, you can get someone to do a commentary-like feature where the commentary occurs over previous year’s game highlights.

After which, you can add textual graphics that highlight the game dates, venue and who your school team is going to play against. You can even get one of the team members, such as the captain, to request the other students to attend the game and show support.

You can add some music in there too. Music is a nice way to keep your school morning announcements interesting. This is something that radio show hosts rely on a lot. Certain tunes and sounds are used to alert the listener and get them to pay attention. The same can be done for your special video announcements.

There’s no end to ideas

What we’ve listed out above are just a few basic ideas. There are a lot more topics that can be covered as part of the school morning announcement. Your school’s newspaper club would be a great source for information.

As for more ideas, just ask students for tips and feedback. Young children are pretty imaginative. So, you never know where and inside whose head the next big idea is hiding. As long as young minds are engaged, you can be sure there will always be something fresh to offer.

What's in the news? 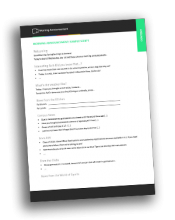